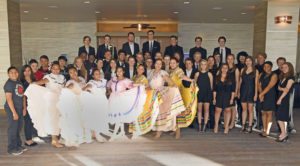 In honor of the DPS Foundation’s 25th Anniversary, Achieve Gala 2017 featured a musical ensemble unlike ever before. The DPS student groups that took the stage were DCIS Montbello rock band Ride, DSA Jazz Band, East Angelaires, and Kunsmiller Creative Academy Dance Troupe. These groups have all performed at the gala individually in previous years and this year they joined together for a special ensemble performance. They came from schools across Denver, from different neighborhoods and with diverse students. Bringing the music together took practice, but it was amazing to see the hard work and unity of everyone coming together for an outstanding performance!

Some more details on each of the student groups: DCIS Montbello Rock Band, Ride – Directed by Priscilla Rahn.
This modern rock band consists of sixth through eighth-grade students. Thanks to the generous instrument donations from Little Kids Rock and local musician Libby Anschutz, students from DCIS are able to participate in music classes for the first time this year.

Denver School of the Arts Jazz Workship – Directed by Dave Hammond.
This group of high school students performed a piece where the chorus section was recreated by one of the students as a jazz piece. The band will be performing at a very prestigious jazz festival later this year in New York City where only 15 bands nationwide were selected to participate. 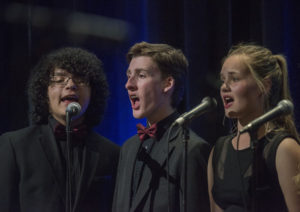 Kunsmiller Creative Arts Academy Dance Troupe – Directed by William Starn.
These students come from different classes in grades six through twelve to perform a routine together that incorporates ballet, modern jazz and ethnic dancing. The students performed a piece called “Guaco” from Mexico. They’ll perform next at the Latin Arts Festival.

A big thank you to our Entertainment Sponsor tonight, RevGen partners!